"Yes Mani, There IS No place Like Cape Coral"

For years, a small group of volunteers trudged along dedicating their lives to helping those in need.  Following the footsteps of their founding mother, Eleanor M. Nelsen, and their Savior, Jesus Christ, they scripted and saved, cleaned and washed, cooked and sewed, preparing a room for the disadvantaged soles who had none.  Each room they let out was immaculate.  decorately painted with accent colors, colorful pictures on the wall, Queen size bed; television stand with dresser; dining table with 2 chairs; end table; coffee table; love seat sofa bed; lamps; full size refrigerator; and microwave and toaster.  Fully furnished with satellite TV that had 120 channels, HBO, Showtime, and all your local stations.  In recent modern times internet Wi-Fi was added.  Low income senior citizens and low income persons of limited disabilities were given subsidized rates off of the normal rental value.   All that was needed was some linens, and eating utensils, and you had a lovely home, a roof over your head, and a safe, clean quiet, and peaceful atmosphere. .  Occupants were not just tenants, they were Residents, and treated like family.  Melting together in common, they helped each other when in need.  With the exception of an occasional disruptive troublemaker, The Haven of Divine Love was paradise for many of those who once lived on the streets.  The traditional gathering for pot luck-dinners, Bar-B-Q's, pizza parties and socials made The Haven a family atmosphere, and a heavenly place.  Everything was great UNTIL THE DEVIL SHOWED UP!  A master of disguise, he fooled a lot of people until his colors came out.  In reality, he was a devout Atheist.  He hated God, Jesus Christ, and religion in its entirety.  After his attempts to extort, blackmail, and defraud failed, he went on a rampage to destroy and revenge.  Nothing could stop his rage.  He went on a mission to divide and conquer, no matter what it took.  His evil power was so strong that he had no problem colluding with like mind destroyers from local government and media.  His name was Michael, but not the St. Michael of God's legion of Angels.  But just like in every evil terror movement in history, goodness always prevails.  Drawing a line in the sand, and vowed to stand up and fight for righteousness, the dedicated Members of the Religious Community refused to give in to the dark side.  Victory is almost certain now, and the newly released book,  "Yes Marni, There IS No Place Like Cape Coral"  will open your eyes to the evil and corruption that they endured.  Names, Dates, Actions will astound you to the horrors that existed.   This is a story right out of the passages and parables of the Bible.  Tells of the Priests and Levites of the Cape Coral community looking the other way and passing by the stripped and beaten traveler.  Tells you of lies, deceit, and dishonesty for personal gain.  Religious persecution of modern times.  A God's House Condemned to punish dissidents will go down in the history books of Cape Coral Florida.. 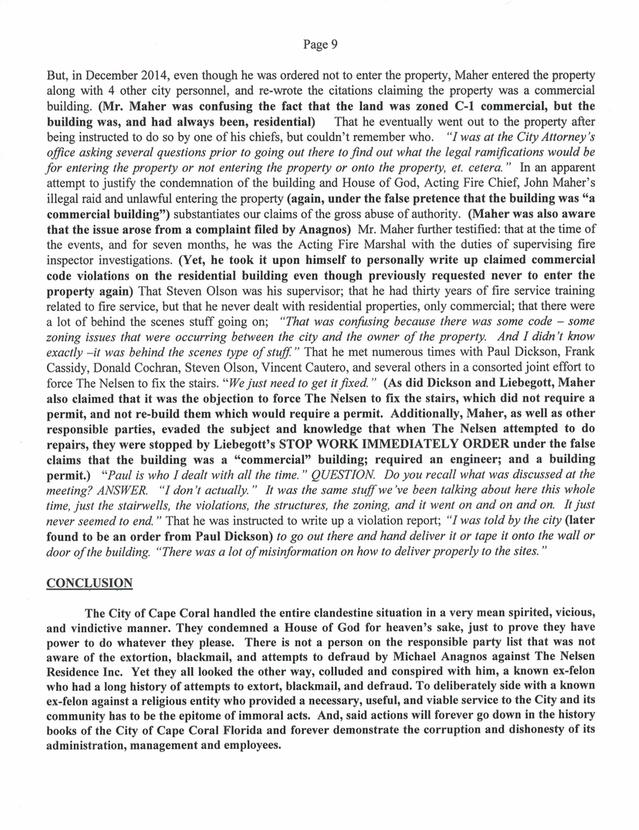 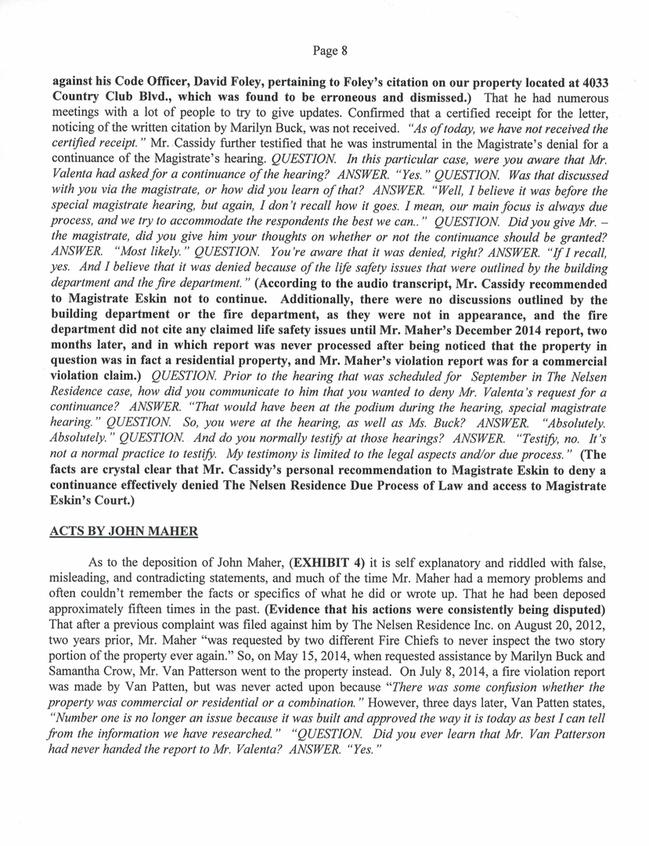 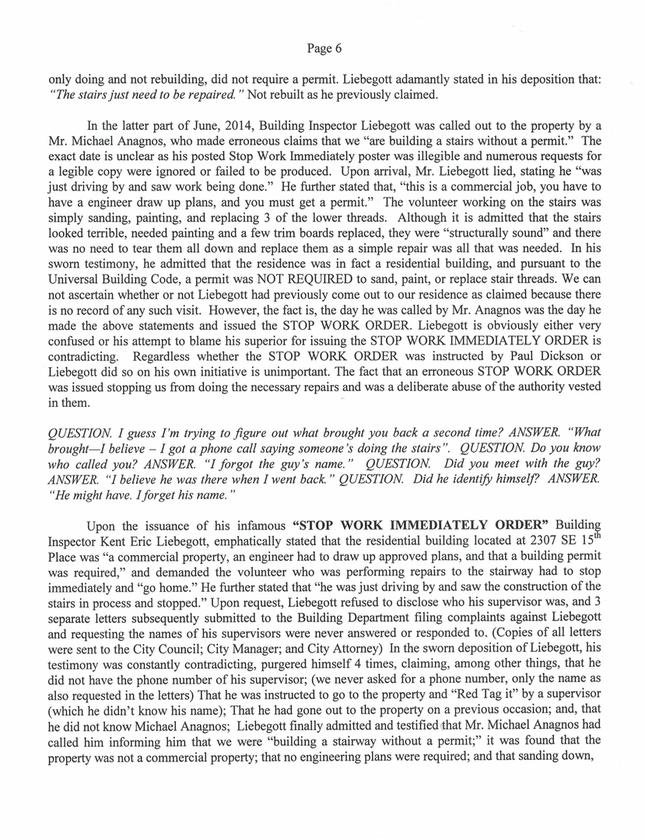 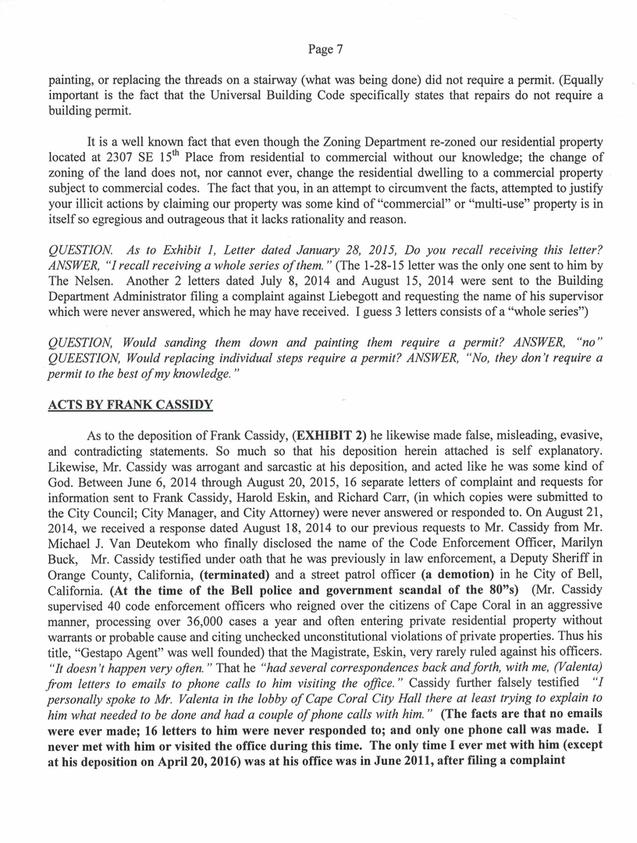 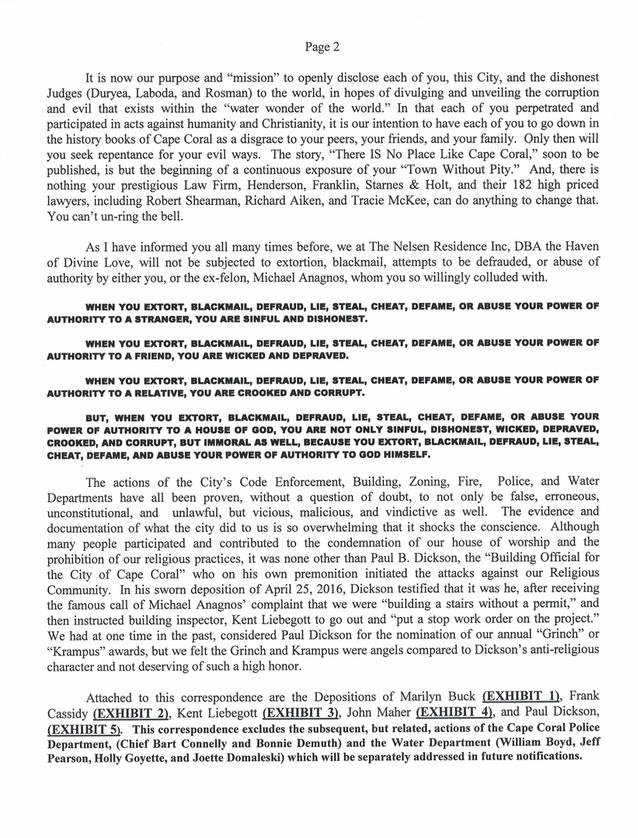 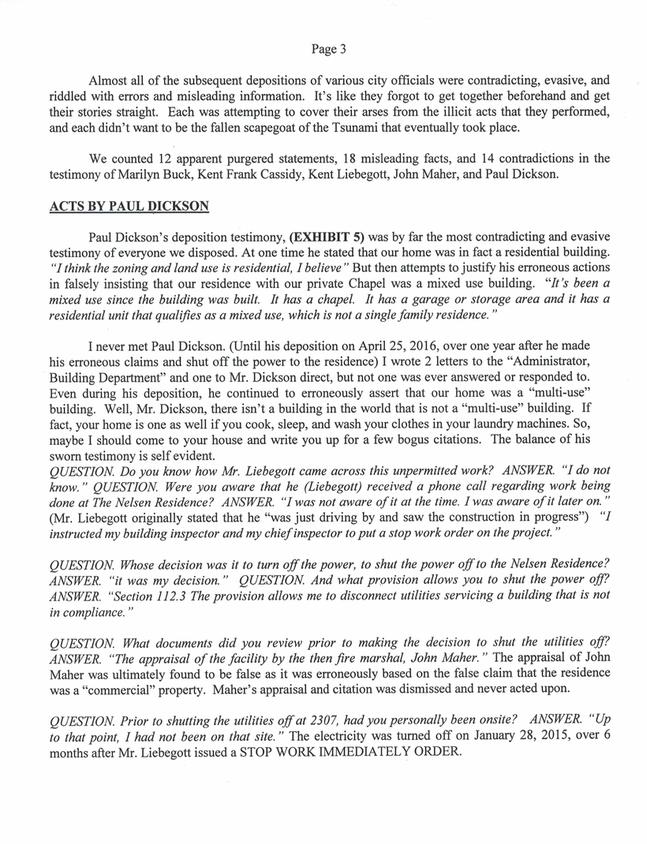 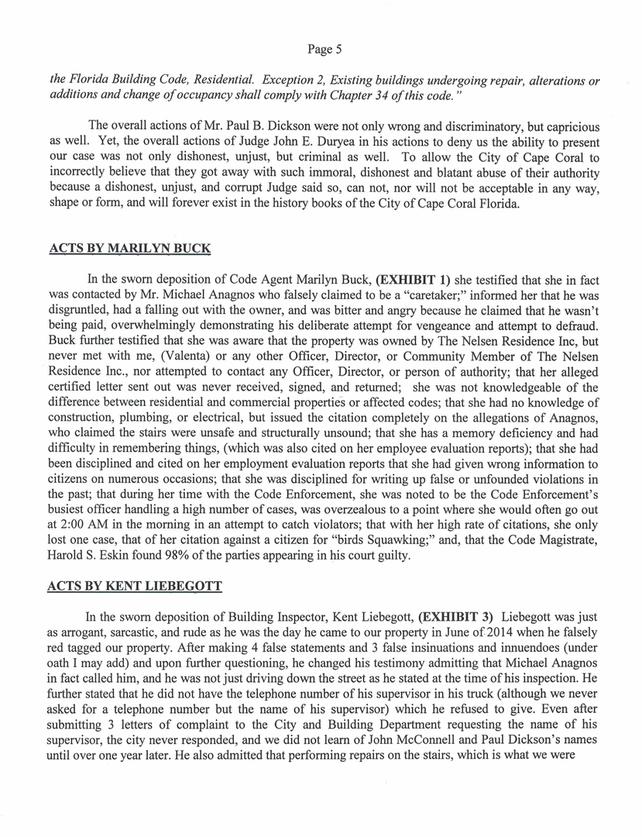 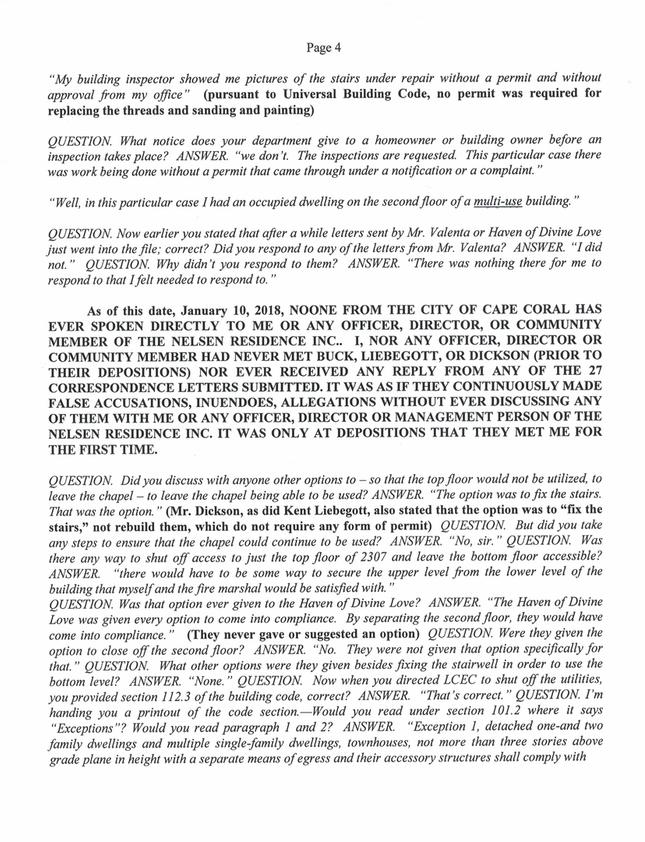 WHAT THIS STORY IS ALL ABOUT.

Failed attempts to extort, blackmail, and defraud resulted in a perpetrator’s attempt to seek revenge and get even.  Dissident resident, Michael Anagnos, filed 12 complaints against The Nelsen Residence Inc. and their operations, The Haven of Divine Love, with every government entity he could think of.  IRS, State of Florida, City of Cape Coral, and in the Courts.  As of this day, all but the complaint filed with the City of Cape Coral has been exonerated. Complaints to the IRS and State taxing authorities have all been determined to be false and unfounded. Complaint claiming he was an employee in the Federal Labor Court was found to be untrue and in the jury trial that cost tens of thousands of dollars of damages to Nelsen, the jury, and the subsequent Appellate Court ruled that Mr. Anagnos had no claims. In the Local Court where Anagnos made claims that he was being “Stalked” by the President of The Nelsen in their filing for eviction proceedings, the Court found said accusation untrue.  But, The City of Cape Coral, and a slew of unscrupulous employees, sided with the ex-felon, who had a long history of extortion, blackmail and attempts to defraud, against a religious organization that provided an important humanitarian service to their community. The only reasonable conclusion can only be that the City used the dissident’s claims to seek their own discriminatory actions against a service they have steadfastly resisted to exist.  After all, the City has continuously refused to operate any type of homeless shelter, allow for any Missions to assist the unfortunates, allow any substance abuse treatment facilities within the city limits, and allow or build any low cost HUD housing for lower income citizens of the area.  The Haven of Divine Love is the only facility within the entire city to provide low cost housing for seniors and disability parties, a group that the city has thwarted its existence since its beginning.  It appears that The City of Cape Coral wants to be the “Beverly Hills” of Florida, and will do anything possible to maintain such status.

After making claims that he was “going to fall down the stairs and sue this place for everything they got,” Anagnos contacted the City Building and Code Enforcement Departments alleging that the stairway of the residence building leading up to the second story balcony “was unsafe,” staged a set of colluded and coerced events that followed. Every imaginable action that could ever happen was predominating in this story. Abuse of Authority; Cover-up by higher authority; Lies, deception and dishonesty of public servants; Unethical behavior of Attorneys at Law and Officers of the Court; and discovered fraud and deception within the Court.

Even after the City realized their errors and unfounded claims, instead of attempting to correct and resolve them, they initiated a series of events to not only cover up their illicit actions, but to outwardly attempt to discredit and destroy the organization that so adamantly refuted their false claims.

This author doesn’t have to make any allegations, innuendoes, insinuations, or accusations to report this story because the facts speak for themselves.  And that is what will be reported, the facts which consists of the truth, the whole truth, and nothing but the truth.  Every correspondence, document, e-mail, and transcript will be published so that they become public records and forever be in the history books of a “TOWN WITHOUT PITY.”

Information as to what occurred could not be presented any better by this author than the 10-page letter of January 10, 2018 by The Nelsen Residence Inc. to the Cape Coral City Council; City Manager, John Szerlag; and all of the responsible parties who individually and collectively colluded, conspired, and aided the shameful acts against God’s House and his servants. 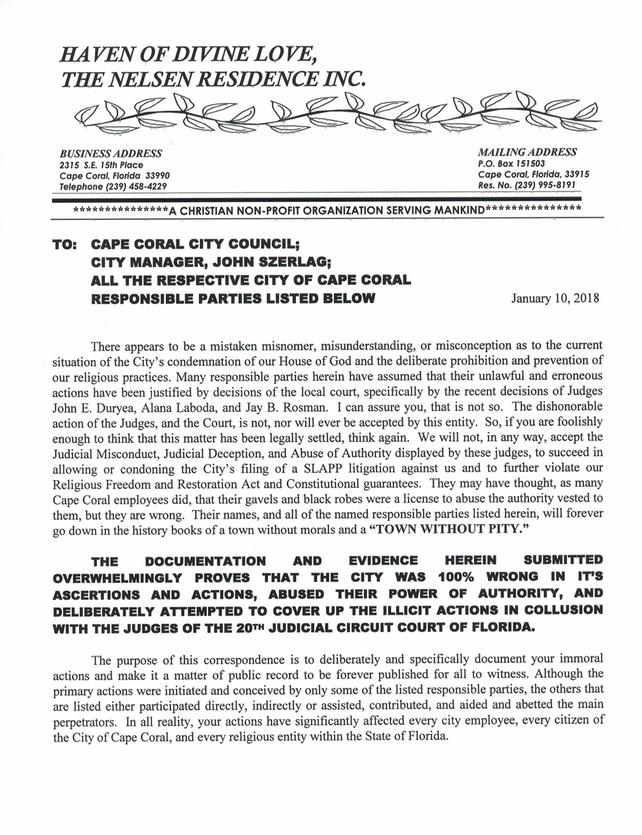 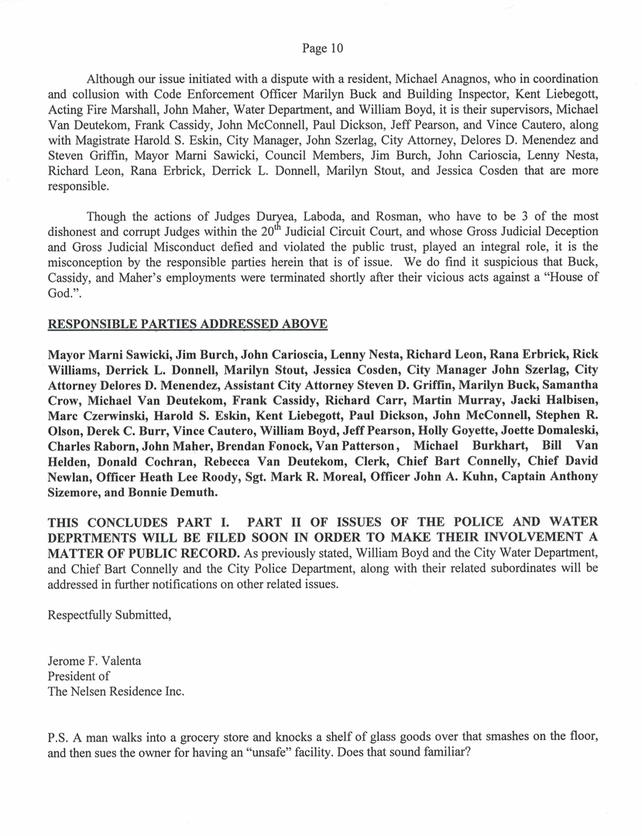